Where diamonds are found and mined in South Africa 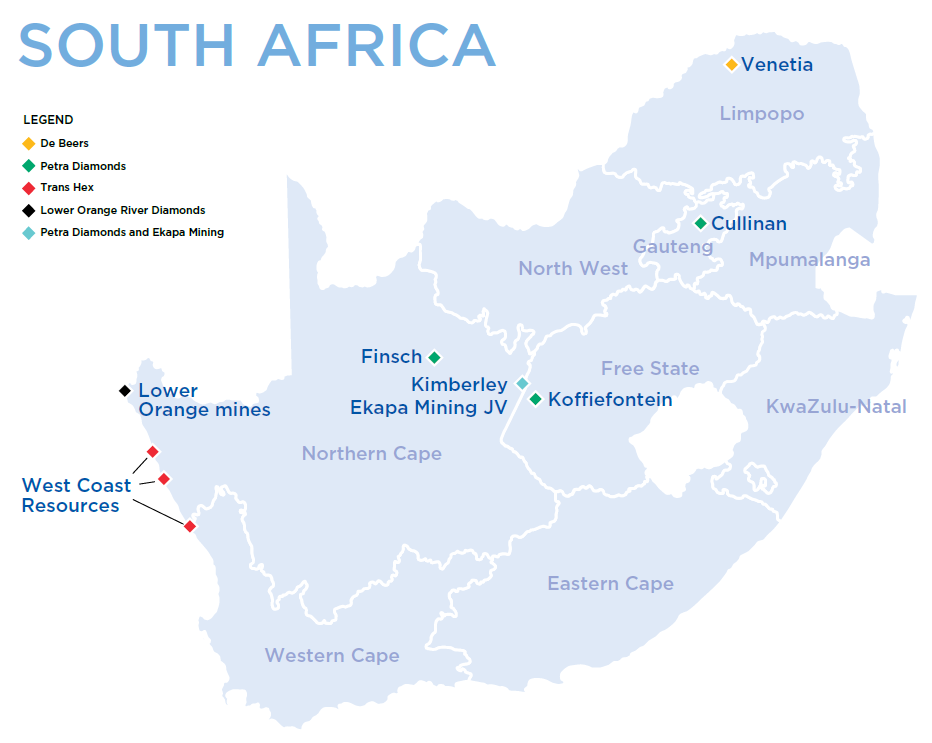 Natural diamonds were formed some 3.3 billion years ago in conditions of intense heat and pressure 150km below the earth’s surface.

Alluvial diamonds were the first diamonds to be discovered in South Africa. Alluvial means these were diamonds that had been removed from their primary position by erosion over millions of years, and deposited in a river bed, ocean floor or shoreline.

By 1869, diamonds were found far from any stream or river, first in yellow earth and then below ground in hard rock called blue ground near and in what was to become Kimberley in the Northern Cape, the world’s diamond capital. The blue ground was subsequently named kimberlite, after the mining town. These kimberlites in ancient, vertically-dipping volcanic pipes are the primary sources of South Africa’s diamonds most of which were initially suitable for open-cast mining. 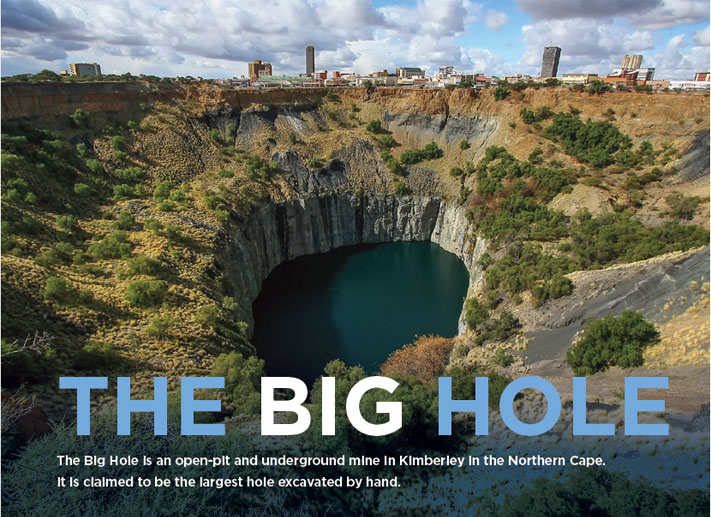 The first diamonds were found at the future site of the Big Hole on the farm Vooruitzicht belonging to the De Beers brothers, in 1871. The ensuing scramble for claims led to the place being called New Rush, later renamed Kimberley. From 1871 to 1914 up to 50,000 miners dug the hole with picks and shovels, yielding 2,720kg or 13,600,000ct of diamonds. The Big Hole has a surface of 17ha and is 463m wide. It was excavated to a depth of 240m, but then partially infilled with debris reducing its depth to about 215m. Since then it has accumulated about 40m of water, leaving 175m of the hole visible. Once above-ground operations became too dangerous and unproductive, the kimberlite pipe was also mined underground by the De Beers company to a depth of 1,097m.

There is currently an effort in progress to register the Big Hole as a World Heritage Site. 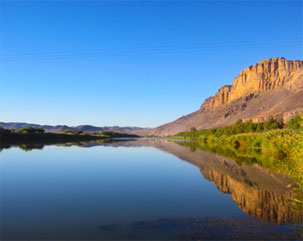 Diamonds were later discovered in significant quantities in kimberlites in what was then known as the Transvaal – the Cullinan mine near Pretoria was opened in 1902 and then Venetia in 1992. The Finsch mine in the Northern Cape opened in 1967.

Alluvial diamonds and small diamondiferous fissures have been known and worked for many years along the southern banks of the Orange River as well as along and off South Africa’s west coast.