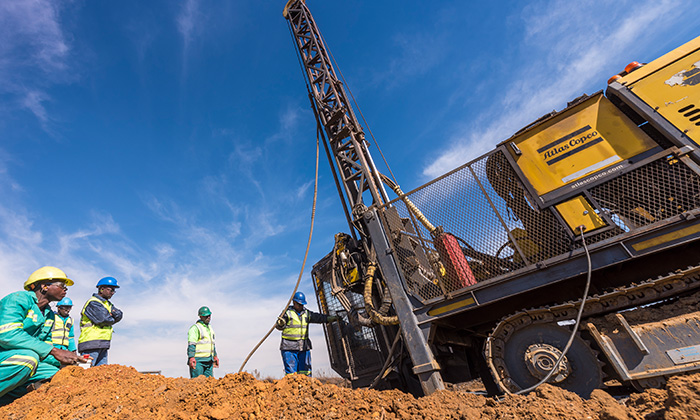 Coal exploration includes gathering data, which allows for decisions to be made on the desirability of further exploration, the technical feasibility of mining, and economic feasibility – including the size of the mine and the quality of the coal.

Geologic mapping, aerial photography and photogrammetry are all used in exploration. Drilling is the most reliable and cost-effective method of gathering information about a coal deposit and the mining conditions. It provides physical samples of the coal and overlying strata for chemical and physical analysis. Geophysical exploration measures the seismic, electric, magnetic, radiometric and gravitational properties of materials in order to detect the structural features that define the coal deposits. 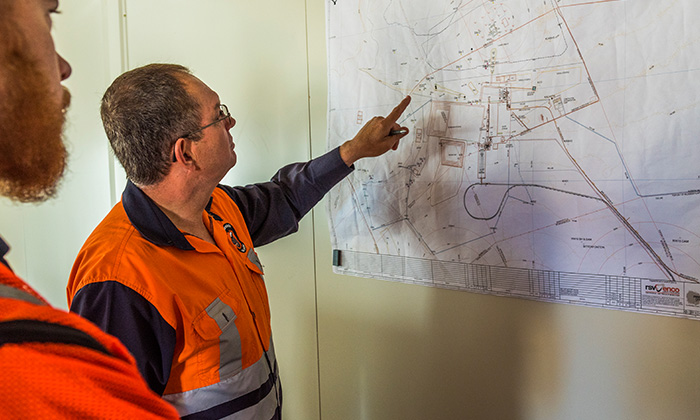 Coal can be extracted from the earth either by surface mining or underground mining.

In open-pit coal mining, a pit is dug in an area and this pit becomes the open-pit mine, sometimes called a quarry. Open-pit mines can expand to huge dimensions, until the coal deposit has been mined or the cost of transporting becomes too great.

In underground coal mining, access to the coal seam is gained by suitable openings from the surface, and a network of roadways driven in the seam then makes possible the installation of facilities for human and material transport, ventilation, water handling and drainage, and power. 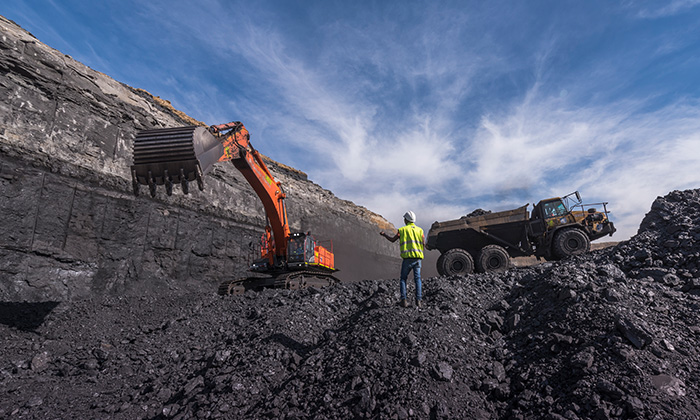 Some 53% of South Africa’s coal is produced from surface mining, via open-cast or open-pit mines. This is because the coal is less than 60 metres below the surface.

Open-pit mines use draglines, as well as truck and shovel operations to extract coal. A dragline excavator uses a dragline to pull a bucket by a wire cable. The operator lowers the bucket down to the coal deposit to be excavated. Next, the operator draws the cable so that the bucket gets dragged along the ground and digs into the deposit. The bucket is then lifted and places the coal it has scooped up where it is needed. 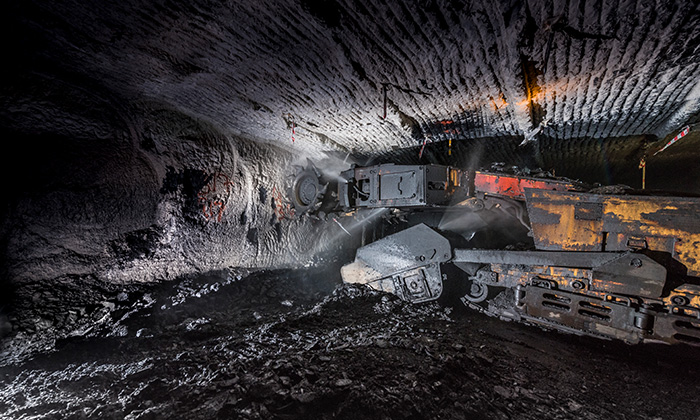 Some 47% of South Africa’s coal is produced from bord-and-pillar mining, stoping and longwall mining, types of underground extraction which access coal up to 300 metres under the ground.

Miners travel by lifts down a mine shaft to reach the depths of the mine or enter by means of decline shafts or adits for shallower mines. They operate heavy machinery that extracts the coal and moves it above ground.

In longwall mining, continuous longwall miners slice off enormous panels of coal that are about one metre thick, three to four kilometres long, and 250-400 metres wide. The coal is moved by conveyor belt back to the surface. The roof of the mine is maintained by hydraulic supports. As the mine advances, these supports also advance. The area behind the supports collapses.

Stoping is practised when the surrounding rock is strong enough to permit the drilling, blasting, and removal of the coal without caving. In most cases artificial support is also provided.

In bord-and-pillar mining, miners carve a ‘gallery’ out of coal. Columns (pillars) of coal support the ceiling and overburden. The galleries are about nine metres wide, and the support pillars can be 30 metres wide.

A sophisticated machine called a continuous miner extracts the coal or more conventionally, coal can be blasted from the working face.

Underground mining operations leave tailings. Tailings are the residue left over from the process of separating coal from economically unimportant minerals during the coal processing step at plants. 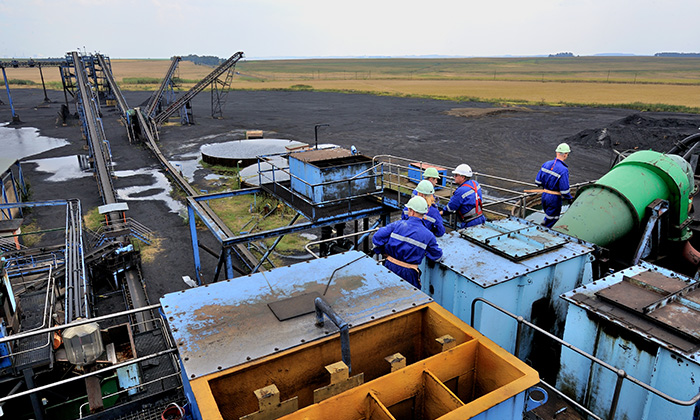 Underground-mine ventilation provides oxygen to the miners and dilutes, renders harmless, and carries away dangerous accumulations of gases and dust. In some of the gassiest mines, more than six tonnes of air are circulated through the mine for every tonne of coal mined. Air circulation is achieved by creating a pressure difference between the mine workings and the surface through the use of fans. Fresh air is also brought near the production faces, the locations of which may change several times in a shift. 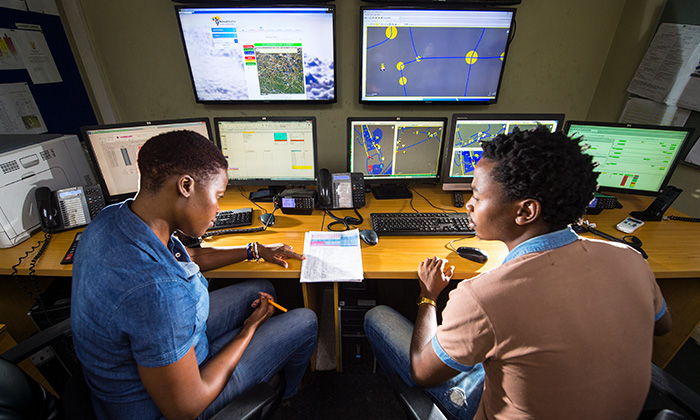 Advancements in sensor technology and in computer hardware and software capabilities are finding increasing application in underground coal mines, especially in the monitoring and control of ventilation, haulage, and machine condition. Machinery can be remotely operated, and continuous miners have also been equipped with automatic controls. The atmospheric environment is remotely monitored for air velocity, concentrations of various gases, and airborne dust; fans and pumps are also monitored continuously for their operational status and characteristics. 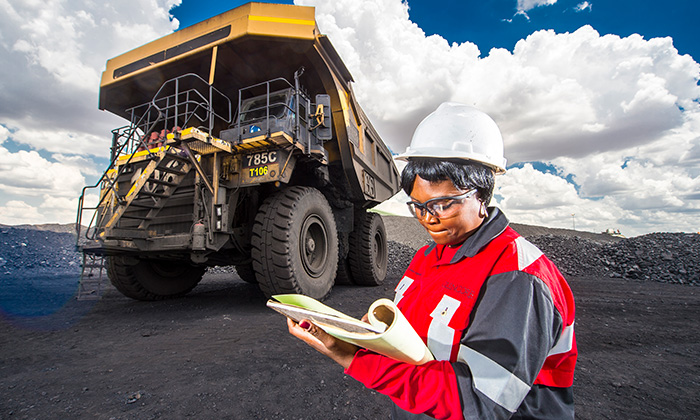 Coal haulage, the transport of mined coal from working faces to the surface, is a major factor in underground-mine efficiency. It can be considered in three stages: face haulage, which transfers the coal from working faces; intermediate haulage, which transfers the coal onto the main haulage; and the main haulage system, which removes the coal from the mine. Various methods of haulage are used in different situations and stages and may include electric-powered, rubber-tyred vehicles; chain haulage; armoured face conveyors, mine cars driven by electric- or diesel-powered locomotives.

Workers and materials may be carried to and from the working face by scoops, battery- or diesel-powered trucks, tractors, buses or light duty vehicles. 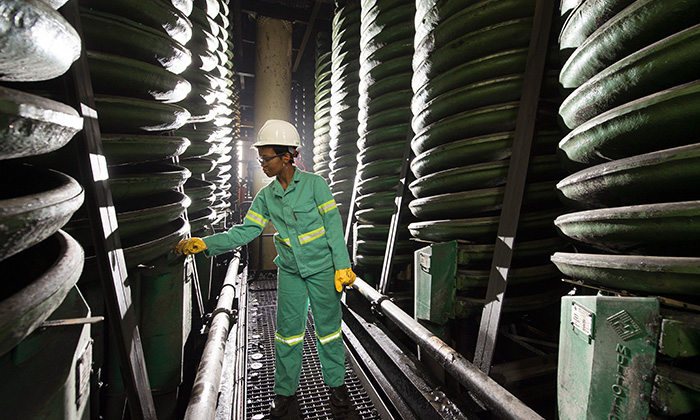 The coal that comes directly from a mine has impurities in it. Buyers may demand certain specifications depending on the intended use of the coal: utility combustion, carbonisation, liquefaction, or gasification.

A coal preparation or beneficiation plant is a facility that washes coal of impurities such as ash, soil and rock, crushes it into graded and sized chunks (sorting), stockpiles grades, and prepares and loads it for transport to market.

The more of this waste that can be removed from coal, the lower its total ash content, the greater its market value (because its heating value has increased) and the lower its transportation costs. 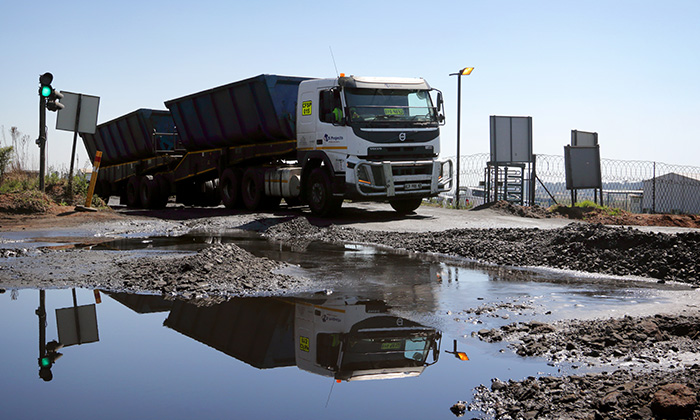 Once coal has been prepared, higher grades are delivered to export markets while the lower-grade product is purchased by Eskom and burned in specially-designed power station boiler hearths.

Richards Bay Coal Terminal (RBCT) serves as the primary export port for South African coal, and is one of the world’s leading coal export terminals. South Africa’s national utility, Transnet, provides the railway services linking the coal mines to the port, and the shipping coordination of more than 900 ships per annum.

Positioned at one of the world’s deep sea ports, RBCT is able to handle large ships and subsequent large volumes. It has gained a reputation for operating efficiently and reliably. The 276 hectare site currently boasts a quay 2.22  kilometres long with six berths and four ship loaders, with stockyard capacity of 8.2 million tonnes. 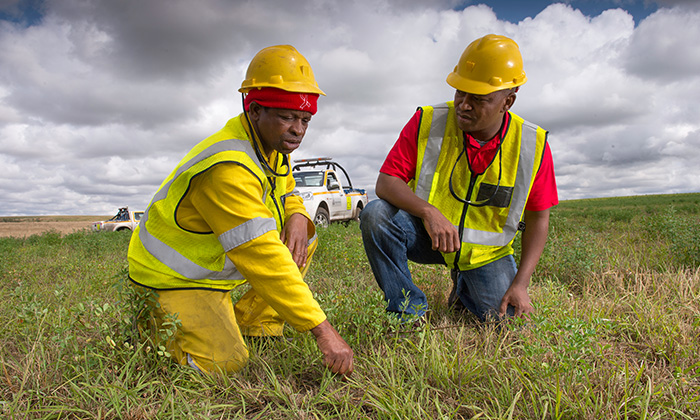 Reclamation operations include backfilling, regrading the final surface, and revegetating and restoring the land for future use. These actions are carried out at the same time as the mining operation in order to reduce erosion and sediment discharge, slope instability, and water-quality problems.

A primary goal of reclamation is to restore or enhance the land-use capability of disturbed land. Various reclamation programmes aim to restore the ground for farming and livestock, reforestation, recreation, and housing and industrial sites.