Geologists use many methods to explore for kimberlites – the primary sources of diamonds – including satellite remote sensing, geophysics and reconnaissance sampling. Any kimberlites discovered can then be drilled to establish whether or not they contain economic quantities of diamonds.

Extracting core for analysis will give indications of grade, cost per tonne and average value per carat. From here, a decision whether to mine or not can be made.

There are two types of pipe mining, namely open-pit mining and underground mining.

Open-pit mining involves removing the layers of sand and rock found just above the kimberlite. Once exposed, the ore in the pit is broken up by blasting. A single blast can break approximately 45,000 tonnes of ore. Once the ore is broken, excavators load the ore into haul trucks and transport it to a primary ore crusher where the diamond extracting process begins. Venetia mine is an example of open-pit mining.

In underground mining, miners tunnel into the earth’s crust through the kimberlite pipe. Tunnels are constructed on two levels about 25m vertically apart. The upper level is used for undercutting the ore zone to initiate caving. The lower production level is used to extract the bulk of the ore through funnel like excavations from the upper level. In the lower level, load haul dumpers collect the broken ore and take it to a crusher before being taken to surface for processing. 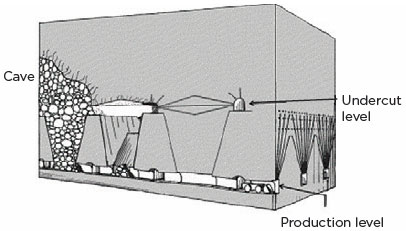 Over thousands of years, kimberlite pipe that reaches the earth’s surface is eroded and weathered by wind, rain and water courses. The eroded kimberlite bore rough diamonds, which were carried downstream in ancient river channels to the coast. Some of these diamonds settled in these old river channels, while some of those that were washed into the ocean were deposited back on ancient beaches. The gravels in which these diamonds are found were covered under layers of other material, such as sand, mud, clay and underwater plantlife. The first diamonds discovered in South Africa were from alluvial deposits.

Today, industrial alluvial mining is conducted in a number of different ways, all aimed to remove the material that has, over time, covered the diamond-bearing gravel. Once the gravel layer is reached, it is collected and hauled to a production plant for processing. Due to being washed downstream by water and impacting rocks along the way which tends to break any diamond with a flaw, most of the alluvial diamonds found are comparatively small, but of high quality and value.

Marine mining involves extracting diamonds from the seabed, hundreds of metres under water. The earliest form of marine mining entailed shore diving, where a swimmer would collect diamond-bearing gravel from the shallow seabed. Today specialised ships mine for diamonds deep out to sea. These ships use a powerful crawler that sucks up gravel on the seabed through flexible pipes. Sometimes a large-scale drill mounted to a ship is used to excavate for diamonds.

Diamonds are recovered from ore in five stages: 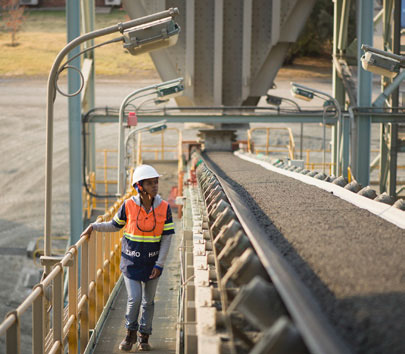 In this stage, the ore is scrubbed to remove loose excess material and is screened. Material smaller than 1.5mm is discarded because it is too costly to extract diamonds from such a small piece of ore.

During this stage the diamond-bearing ore is mixed with a solution of ferrosilicon powder and water, which is measured to a specific relative density. This solution is fed into a cyclone, which tumbles the material and forces a separation. Materials with a high density sink to the bottom, which results in a layer of diamond rich concentrate.

At this stage, the diamond rich concentrate is put through a series of processes involving magnetic susceptibility, X-ray luminescence and crystallographic laser fluorescence that are calculated based on the specific properties of diamonds. These processes are designed to separate the rough diamond from any other heavy density materials collected by the cyclonic separation plant. An example is diamond’s fluorescence when exposed to X-rays. Sensors detect flashes of light emitted by the diamond and send a signal to a microprocessor that fires a blast of air at the diamond, which spits it into a collection box.

Diamonds collected in the recovery process are delivered to a sorting facility where they are cleaned in an acid solution and washed before being sorted. The rough diamonds are sorted by size (carat weight) and then each size is sorted into quality ranges, depending on each stone’s colour and clarity. It is at this point that gem quality diamonds are separated from industrial diamonds. 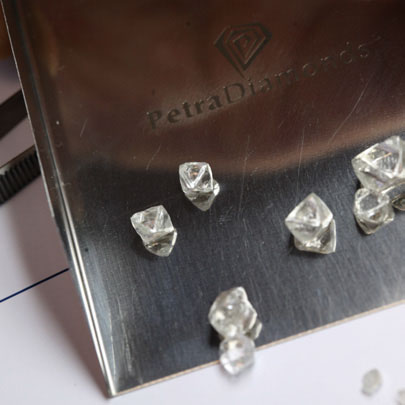 Rough diamonds are typically sold by a tender process, during which participants view the assortments and place a confidential electronic bid on the parcel of their choice. At the end of the tender, the highest bidder wins the parcel.

The rough diamonds are sold to traders with a diamond trading licence. Traders usually send the diamonds for cutting and polishing and then to retailers for sale to the public around the world or to be sold on diamond bourses or exchanges.

The Diamond Trading Company (DTC), a subsidiary of De Beers which markets rough diamonds from De Beers operated mines, sells a parcel of rough diamonds via its sightholder system to a sightholder. Sightholders are companies that have a three-year supply contract with the DTC. Sightholders, in turn, send the diamonds to cutting facilities to be cut and polished in preparation for sale as gemstones.

Rough diamonds are packaged in sealed containers for transport. In accordance with the Kimberley Process*, these containers are sealed with a tamper resistant seal, numbered on site, and a certificate of origin is issued.

The Kimberley Process (KP) originated when Southern African diamond-producing states met in Kimberley in 2000 to discuss ways to stop the trade in ‘conflict’ or ‘blood’ diamonds and ensure that diamond purchases were not financing violence by rebel movements seeking to undermine legitimate governments.

The United Nations General Assembly adopted a landmark resolution supporting the creation of an international certification scheme for rough diamonds. By the end of 2002, negotiations between governments, the international diamond industry and civil society organisations resulted in the creation of the Kimberley Process Certification Scheme (KPCS). The KPCS document sets out the requirements for controlling rough diamond production and trade. The KPCS came into force in 2003.

The KP is open to all countries that are willing and able to implement its requirements. The KP has 54 participants, representing 81 countries, with the European Union and its Member States counting as a single participant. KP members account for approximately 99.8% of the global production of rough diamonds.

The KP is chaired, on a rotating basis, by participating countries and members gather twice a year to discuss matters of concern.

Diamond cutting is both an art and an exact science. The skills needed to be a proficient diamond cutter and polisher take years of training to acquire. 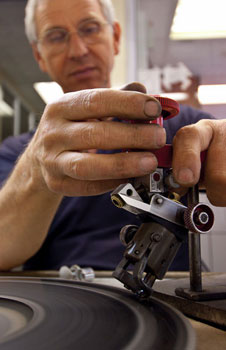 Marking is the first stage of the diamond cutting and polishing process. It entails examining and measuring a rough diamond, where inclusions are noted and the yield of the rough is determined – a diamond marker may decide to mark two or three diamonds from one piece of rough depending on the characteristics and inclusions present in the diamond. It may make more sense to polish two diamonds from a large rough around an inclusion to yield two smaller stones with a higher clarity, as opposed to one larger stone with a low clarity grade. Using the latest 3D laser scanning technology, the rough diamond is marked to guide the diamond cutter.

It is the diamond powder that physically cuts the diamond, not the copper blade – diamonds are the hardest known mineral to man, and only a diamond will cut another diamond.

Here the rough diamond is set onto a dopstick (a metallic rod that holds the stone while it is being processed) using a special type of cement to secure it. During this stage, two rough diamonds rub together and the friction wears the corners of the diamond down until it is round in shape.

The diamond is set into a tang (traditional polishing tool) and lowered onto a scaife. A scaife is a wheel impregnated with oil and diamond powder, which revolves at an incredible 3,000 revolutions per minute. Here the diamond cutter polishes the four main crown and four main pavilion facets.

These facets are then divided into another four facets on the top and bottom which are polished to achieve an eight square.

Bruting and girdling – the second time

The diamond is bruted a second time to ensure that the stone is perfectly round.

Here the remaining facets are polished and shaped to refract and reflect the optimal amount of white light. It is this stage that determines how much fire, brilliance and scintillation the diamond will have and it requires great skill and experience. The ultimate goal is to obtain ideal proportions and perfect symmetry.

Diamonds prepared as gemstones are sold on diamond bourses or exchanges. There are some 30 registered diamond exchanges in the world, including South Africa. Diamond exchanges are places where dealers, brokers, and manufacturers meet to buy and sell diamonds. Wholesalers and retailers can buy small lots of diamonds at exchanges, after which they are prepared for final sale to the consumer. Diamonds can be sold already set in jewellery, or sold loose.

Once the diamond reserve at a mine has been exhausted, the owner must close and rehabilitate the site. Underground tunnels are stabilised and entrances are sealed off. Rehabilitation means the process of returning mined land to its pre-existing condition or to another agreed use.