The diamond is known for its superlative physical qualities, most of which originate from the strong molecular bonds between its atoms. In particular, it has the highest hardness and thermal conductivity of any bulk material.

Diamonds were traded in India as early as the 4th century BC and were thought to possess magical properties – just to gaze at a diamond was considered strengthening. In the 1st century AD, the Roman naturalist Pliny said, “Diamond is the most valuable, not only of precious stones, but of all things in this world.” Their usage in engraving tools also dates to early human history.

The popularity of diamonds has risen since the 19th century because of increased supply, improved cutting and polishing techniques, growth in the world economy, and innovative advertising campaigns.

A diamond is forever

Marketing has significantly affected the image of diamonds as a valuable commodity.

Prior to the 1930s, diamond rings were rarely given as engagement rings. Opals, rubies, sapphires and turquoise were much more popular to give as tokens of love. Then De Beers changed the world diamond market with a brilliant advertising campaign begun in the 1940s, causing demand for diamonds to increase. The campaign was responsible for creating new markets in countries where no diamond tradition had existed before.

The Diamond is forever ad campaign was created by the US advertising agency, NW Ayer, in 1947. In 2000, Advertising Age magazine named this the slogan of the 20th century. 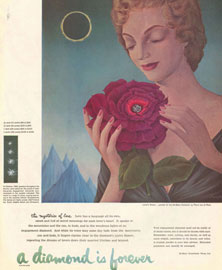 The most familiar uses of diamonds today are as gemstones used for adornment, and as industrial abrasives for cutting hard materials. The dispersion of white light into colours of the spectrum is the primary characteristic of gem diamonds. In the 20th century, experts in gemology developed methods of grading diamonds. Four characteristics, known informally as the ‘4 Cs’, are now commonly used as the basic descriptors of diamonds. 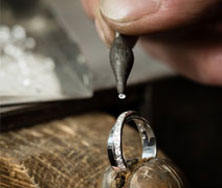 The commercial value of a diamond is determined by four characteristics known as the ‘4 Cs’ – carat, colour, cut and clarity.

The value of a diamond is partly determined by its weight and the price per carat of diamond rises proportionately with size.

A carat is the international unit of measurement used to measure the weight of diamonds. One carat is the equivalent of 0.2 grams.

In the diamond trade, fractions of a carat are referred to as points. One carat is divided into 100 points – so each point is 1/100th of a carat. A 10-point diamond weighs 1/10th of a carat, and a 50-point stone weighs one-half carat.

More weight equals more money so many diamond cutters sacrifice brilliance to maximise carat weight and profit. But, weight does not always equal size or beauty. Poorly cut diamonds, even if they are big, can be dull and lifeless.


The following chart indicates the average mm size per carat: 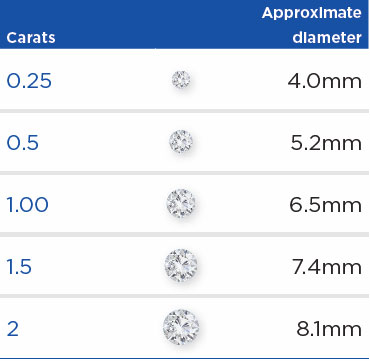 Diamonds typically range from pale yellow to colourless, but can also be brown, blue, green, orange, red, pink and black. Colour has a significant impact on the diamond’s appearance as the presence of noticeable colour may reduce its ability to reflect light. Usually, the most valuable diamonds have little to no detectable colour. But, stones with colour called ‘fancy colours’ are very rare and are highly prized. 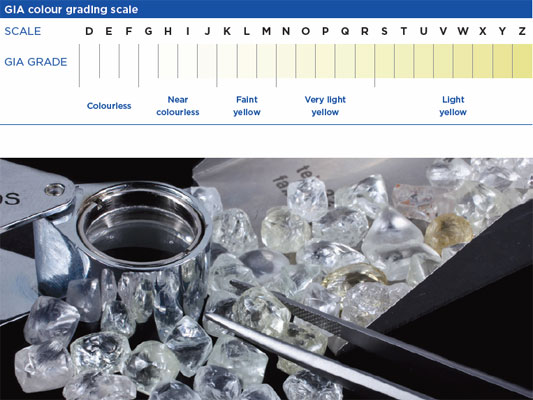 Regardless of the size of the diamond, cut is often considered the most important ‘C’, and is governed by man’s skill rather than by nature. The cut of a diamond is crucial to its ability to reflect light and has the greatest influence on its beauty.

Cut refers to the evenness, symmetry and angle of a diamond’s facets. A master cutter cuts and angles to precise specifications so the diamond optimally reflects the maximum amount of light through the top of the stone giving it sparkle and brilliance. If a diamond is cut too deep, light escapes out of the side and the centre will appear dark, absorbing rather than reflecting light. A very shallow cut results in light escaping through the bottom, causing the diamond to look like a dull piece of glass.

In 1919, Marcel Tolkowsky, a mathematician and gemologist, developed the formula for cutting diamonds to achieve the most brilliance in a diamond. The round brilliant diamond cut has become an industry standard and is known as the ‘American Ideal Cut’ or the ‘Tolkowsky Brilliant’. 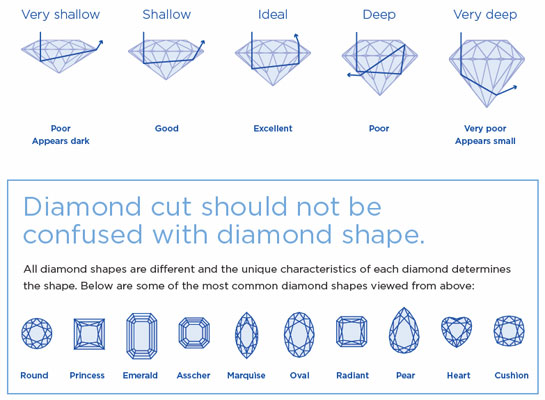 Because they are formed deep within the earth, under extreme heat and pressure; virtually all diamonds contain ‘birthmarks’; small imperfections inside the diamond (called inclusions), or on its surface (called blemishes). Clarity refers to the degree to which these imperfections are present. Therefore, the fewer imperfections or inclusions within a stone, the rarer and the higher its value.

The clarity scale was developed by the GIA to quantify these imperfections.

All diamonds are systematically graded and plotted under 10X magnification. If a trained grader cannot see a clarity characteristic at 10X, it does not affect the clarity grade. 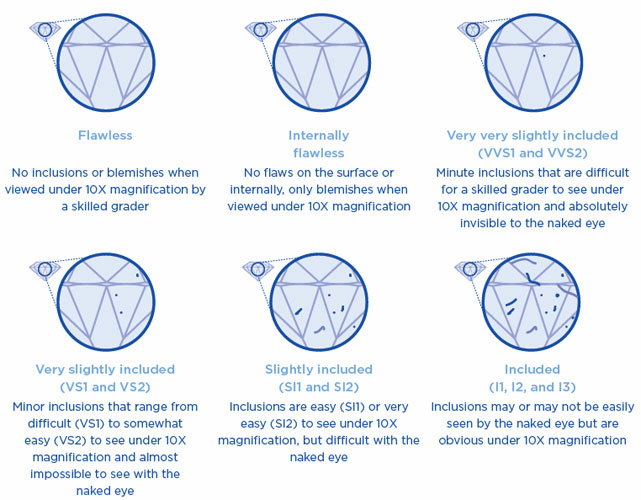