Diamond mining has been taking place in South Africa for almost a century and a half, but the country’s diamond sector is far from reaching the end of its life. Developments at the country’s three largest mines – Venetia, Finsch and Cullinan – are designed to expand their outputs and to extend their lives to anywhere between a quarter and a half a century.

In 2018, South Africa produced 10.5Mct of diamonds. Total sales amounted to R16.3 billion, with 55% of diamonds being exported.

The underground mining and recovery of diamonds continues to this day in the vicinity of Kimberley, the site of the early main discoveries in the 19th century.

Petra Diamonds acquired the Bultfontein, Dutoitspan and Wesselton Mines from De Beers in 2010 and started with development work to open up new areas of these mines. In 2016, Ekapa Minerals, a partnership between Petra Diamonds and Ekapa Mining, bought the treatment plant and old tailings dumps from De Beers. By operating all these resources as a unit in a joint venture, this can significantly extend the life of these operations.

To the west of Kimberley, and on the southern banks of the Orange River some 60km upstream from Port Nolloth, Lower Orange River Diamonds mines largely alluvial diamonds at its Baken and Bloeddrif operations.

Further north in Limpopo province, the Venetia mine owned by De Beers is South Africa’s largest diamond producer, recovering some 8Mct a year. Mining is currently by open-cast methods but the depth limits of the open pit are being reached and an underground mine is being developed to continue production below the open pit. Underground mining will be by conventional block-caving or sub-level caving methods.

The Finsch mine, part of the Petra Diamonds group, is South Africa’s second largest producer and operates as an underground mine using conventional sub-level caving methods. Finsch produces an annual 2.1Mct. The mine is starting to work in new areas which are expected to maintain this level of production.

Near Pretoria and also part of the Petra Diamonds group, the Cullinan mine (originally called Premier) is being restructured and expanded to mine at ever-increasing depths with a life expectancy in excess of 50 years. Expansion is intended to lift annual production from its current 0.8Mct to 2.2Mct by 2019.

The South African Diamond Producers’ Organisation (SADPO) represents the country’s emerging diamond miners and the organisation is supported by the Emerging Miners’ Desk of the Minerals Council South Africa. SADPO is a member of the Minerals Council’s Emerging Miners’ Leadership Forum. SADPO is a voluntary association which aims to streamline the diamond producers’ industry and act in concert with other structures in the industry. Its members include diamond producers and diamond dealers.

The Minerals Council South Africa also has in place a Diamond Leadership Forum which addresses areas of concern to the sector. 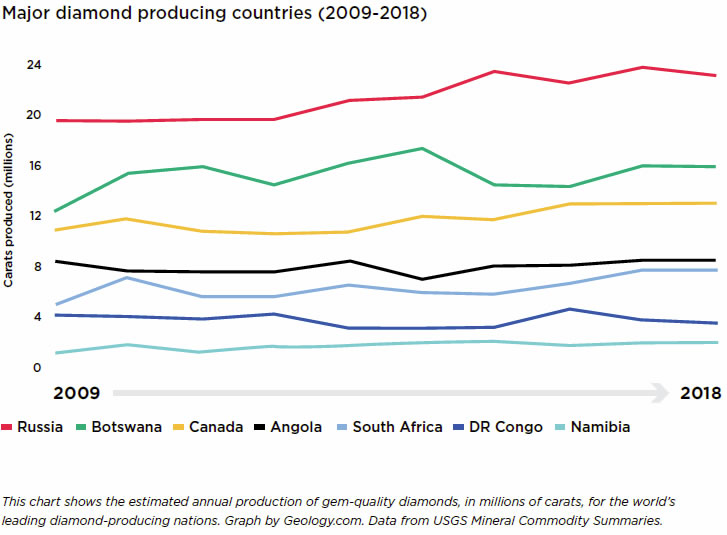